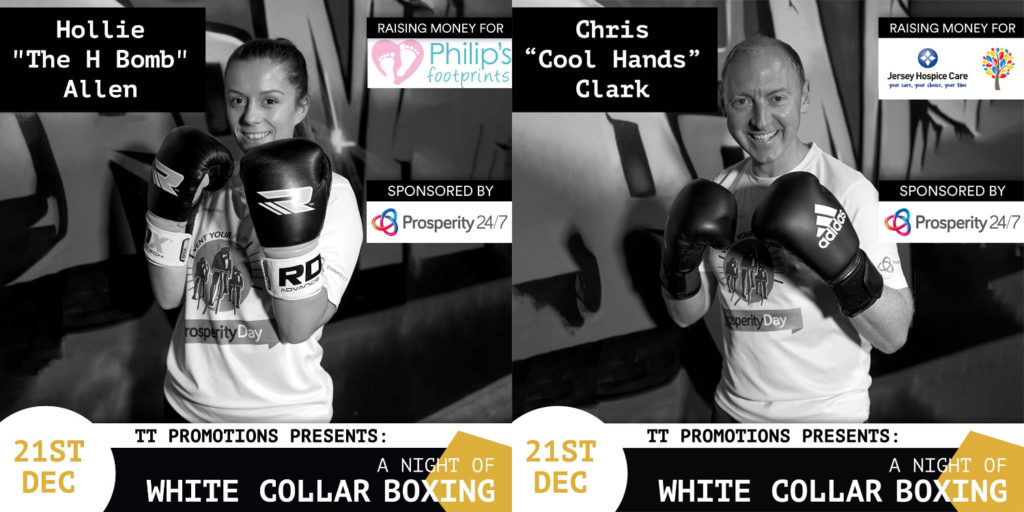 Our fight is through choice. Others are not so lucky…

Hollie and Chris both have their own personal goals, but the most important thing is that both are fighting to raise funds for those who can’t.

When asked why Hollie was raising money for Philip’s Footprints, Hollie advised “Philip’s Footprints was formed in 2008 after it’s founder, Jo Nash, left Maternity with empty arms and broken hearts. Since then, the charity have given over 250 memory boxes to bereaved families.

As no family should have to leave Maternity with a memory box instead of their baby, the Charity are investing in every pregnancy, in professional antenatal training and equipment, and information for pregnant women to reduce the rate of stillbirths, premature births and complications at birth. Improving outcomes for Jersey babies.

As a business Prosperity are also supporting Philip’s Footprints in 2020 with Prosperity Day but I wanted to start raising funds and more awareness of this amazing charity sooner”.

When Chris was asked why he is helping Jersey Hospice Care’s Children and Young People’s Services, Chris said, “When I finished my role as IoD Chairman in Jersey, one of several things I was asked to help with was to raise funds and help the Committee of Jersey Hospice Care, specifically in relation to a potential Children’s Hospice. When you think that the Hospice is a charity that focuses on living, not dying, this is most relevant when you take into consideration their plans for an essential Children’s Hospice in Jersey to support Children, Young People and their families – helping people to live life to the full.

Children experience a variety of rare conditions specific to childhood, they are also growing and developing as they go through illness. Therefore, all specialised medical care, including palliative care, must be tailored to meet the changing needs of infants, children and young people.

When you consider that more than 450 people give their time to volunteer for Jersey Hospice Care each year, with many others helping to raise the £7.3 million it costs each year for primary services, anything that I can do to help the ongoing costs of this additional yet essential service for Children and Young People in Jersey is well worth getting a bop on the nose for!”

If you would like to support Hollie and Chris on the night of the 21st December at the Royal Jersey Showground, tickets are available – we would suggest you contact Chris directly who can help.

Hollie and Chris would like to thank Prosperity 24/7 for sponsoring us both and the 100% support of colleagues and our families. We must also thank the team from Transform Together Fitness for getting us both into great shape and of course both charities for their help in everything that they do – Philip’s Footprints and Jersey Hospice Care.