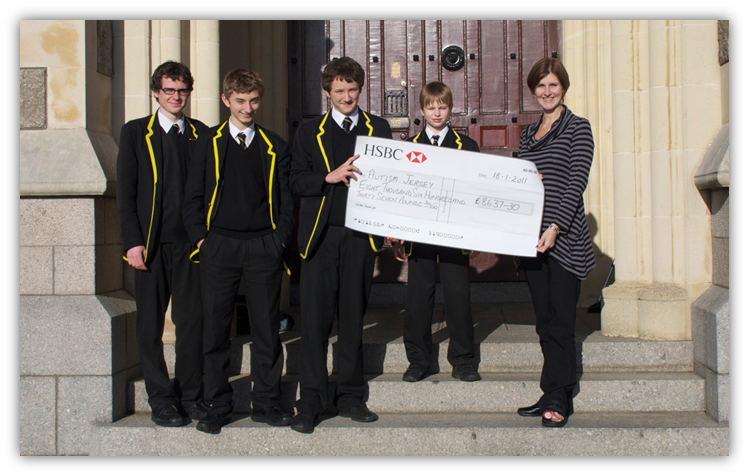 On Saturday 5th April 2014 a group of eight students from Victoria College will once again be taking over the kitchens of the Michelin-starred Ocean Restaurant at The Atlantic Hotel as they prepare and serve a specially created menu for 60 guests to raise money for Autism Jersey by way of lunch or raffle ticket sales.

Update – 3rd April 2014 – The team at Prosperity 24.7 have raised £260 in a single mornings ticket sales, download yours today – Autism Jersey Raffle 2014 and drop the money and completed slip to our offices tomorrow!

The lunch will be the grand finale of a seven-month initiative that has seen the talented 16 and 17 year old students give up their precious Saturday mornings to work with the team at The Atlantic Hotel learning all about the different sections of a professional kitchen including meat, fish and larder as well as receiving an introduction to bread-making, desserts and wine and the practical considerations of how to set a restaurant table and plan an event.

Tickets for the raffle can be accessed here – Autism Jersey Raffle 2014 – they can be dropped in to Prosperity 24.7 offices, 2nd floor, 17 Broad Street, St. Helier.  Tickets for the 5th April Autism Jersey Lunch can be purchased from The Atlantic Hotel by calling Events Manager Anna Robins on 01534 744101 or e-mailing anna.robins@theatlantichotel.com

Regarding the successful relationship between Prosperity 24.7, Victoria College and Autism Jersey, Prosperity 24.7’s Managing Director Chris Clark said: “I was delighted when teacher and Gifted and Talented Coordinator Will Gorman from Victoria College first approached me back in 2010 to work together with the amazing boys at Victoria College. In the first year it was to assist on an Entrepreneurial ‘battle’ with other company owners and teams of students, we had a phenomenal time organising an amazing Art Auction and black tie dinner at the Great Hall which raised in excess of £8,600. At that time, the charity was hardly known so one of our objectives was to raise the profile of the charity and its phenomenal work to the attention of both the Island but most valuably (for the charity) Corporate sponsorship through introductions to JT Global. The awareness or financial support, simply was not there back in 2010. Subsequently we have worked with the school and Will Gorman every year in different ways, whether by encouraging innovation and inspiration in the students or through leveraging our business network to secure a range of prizes for the Annual charity raffle – all of which makes such a valuable contribution to this brilliant local charity – Autism Jersey”.

Will Gorman said: “This is the fourth year that Victoria College and Chris Clark have worked together and the third year that we have worked together with The Atlantic Hotel to raise money for Autism Jersey. Our students have really enjoyed working in the kitchens with Mark Jordan and his team. They’re excited at the prospect of cooking for so many people and at the same time raising money for such an important charity.”

If you want the chance to win some phenomenal prizes, please do not hesitate to download some tickets and drop them with your donations to our offices. You never know, you might win an iPad mini, one of two Sony Playstations, a JT smartphone or an overnight stay with dinner for two people at The Atlantic Hotel – Good luck!

The partnership between Chris Clark, Victoria College and Autism Jersey commenced in 2010 and since then some £13,661 has been raised in support of the charity.