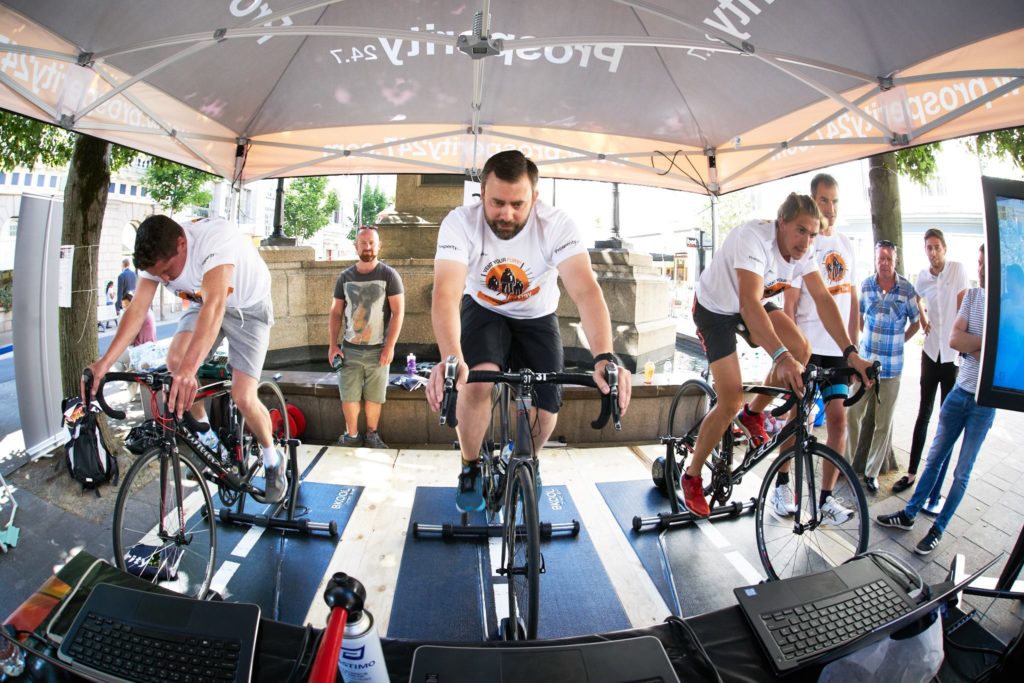 This year, Prosperity Day saw twelve local firms ‘vent their fury’ during multiple resistance trainer relay races. The races used BKOOL turbo trainers that were hooked up to the Internet, taking cyclists up a ‘virtual mountain’, transforming Broad Street into the Col du Tourmalet; the highest paved mountain pass in the French Pyrenees and a ruthless stage of the Tour de France.

The races comprised of 30 minute heats and saw participants race against their corporate neighbours to cover the greatest distance and make it onto the leader board. At 3:30pm, the three top firms, who made it the furthest up the ‘virtual mountain’, entered their best cyclist to pedal for glory in the final 10 lap virtual velodrome sprint. A brilliant effort from Johnny Hickling pushed KPMG Channel Islands to victory with Sure Jersey and Camerons following in second and third place of the cycling race.

The challenge didn’t stop there, with points from the race only contributing to a portion of the scores collected by the teams, the remaining points were determined by the teams’ fundraising efforts. The overall winners were announced at the Prosperity Day awards evening, held at the Jersey Museum. KPMG Channel Islands remained on top and won the Prosperity Day trophy, while top fundraisers Sure Jersey came in second place. With great fundraising efforts Bedell Group managed to move up the leader board into third place, with Camerons following in fourth position.

With an outstanding distance of 135 kilometres cycled, Prosperity Day was a brilliant team achievement, driven by determination, a little corporate rivalry, but most importantly a mission for charity.

‘Prosperity Day 2016 has been absolutely fantastic and everyone involved from our team went above and beyond to help create a brilliant event once more. It’s all about combining our expertise in technology with sportsmanship, corporate fury and, most importantly, it’s about giving back to our community. All competitors deserve serious commendation for busting their gut, not just for their company’s pride, but for the money they helped raise for two awesome charities; Caring Cooks of Jersey and Wet Wheels Jersey.

We would like to thank Big Maggy’s for the loan of bikes and BKOOL for delivering such incredibly technology.  A huge thanks also goes to JT who are providing the all essential Wi-Fi on the day. Barannes and Race Nation also need to be thanked for their refreshments and fund raising platform respectively. Last but not least, a massive thank you has to go to Marisa Hamon and our team at Prosperity 24.7, they are truly the backbone of Prosperity Day.