Apart from being visually pretty, why do we need graphs…?

Because sometimes groups of numbers can behave in very similar ways, but are actually very different! 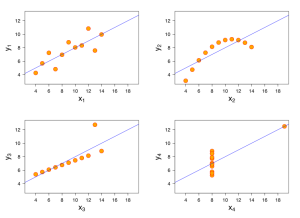 All four sets are identical when examined using simple summary statistics, but vary considerably when graphed

This is called Anscombe’s Quartet after the mathematician who developed the observation in the 1970’s.